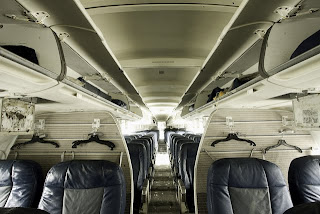 
"Brace For Impact: the aftermath of flight 1549"
Photographs by Stephen Mallon
September 10th-October 11th, 2009
Viewing hours: Fri-Sun 1-6 and by appointment

"On Jan. 15, 2009, a few Canadian geese with bad timing became snarge, a steely pilot became a hero, and the world became fascinated with images of a jet splashing into the Hudson River and then floating calmly as passengers crowded its wings.

But until now, few people have seen the equally surprising pictures of the second half of this story: when a salvage team used the biggest floating crane on the East Coast to pluck the ill-fated Airbus A320 from the frigid water.”

Front Room Gallery is pleased to host Stephen Mallon's artist talk for "Brace For Impact: the aftermath of flight 1549.” It is very difficult to encapsulate the events that happened during and following the crash of flight 1549, but Stephen Mallon's large-scale photographs, taken during the salvage of the fuselage and engine, impart a physicality and scale to these incomprehensible occurrences. Mallon's photos present us with the aftermath of this disaster and remind us how it was averted despite nearly unbeatable odds through the mastery and bravery of the pilot and crew.